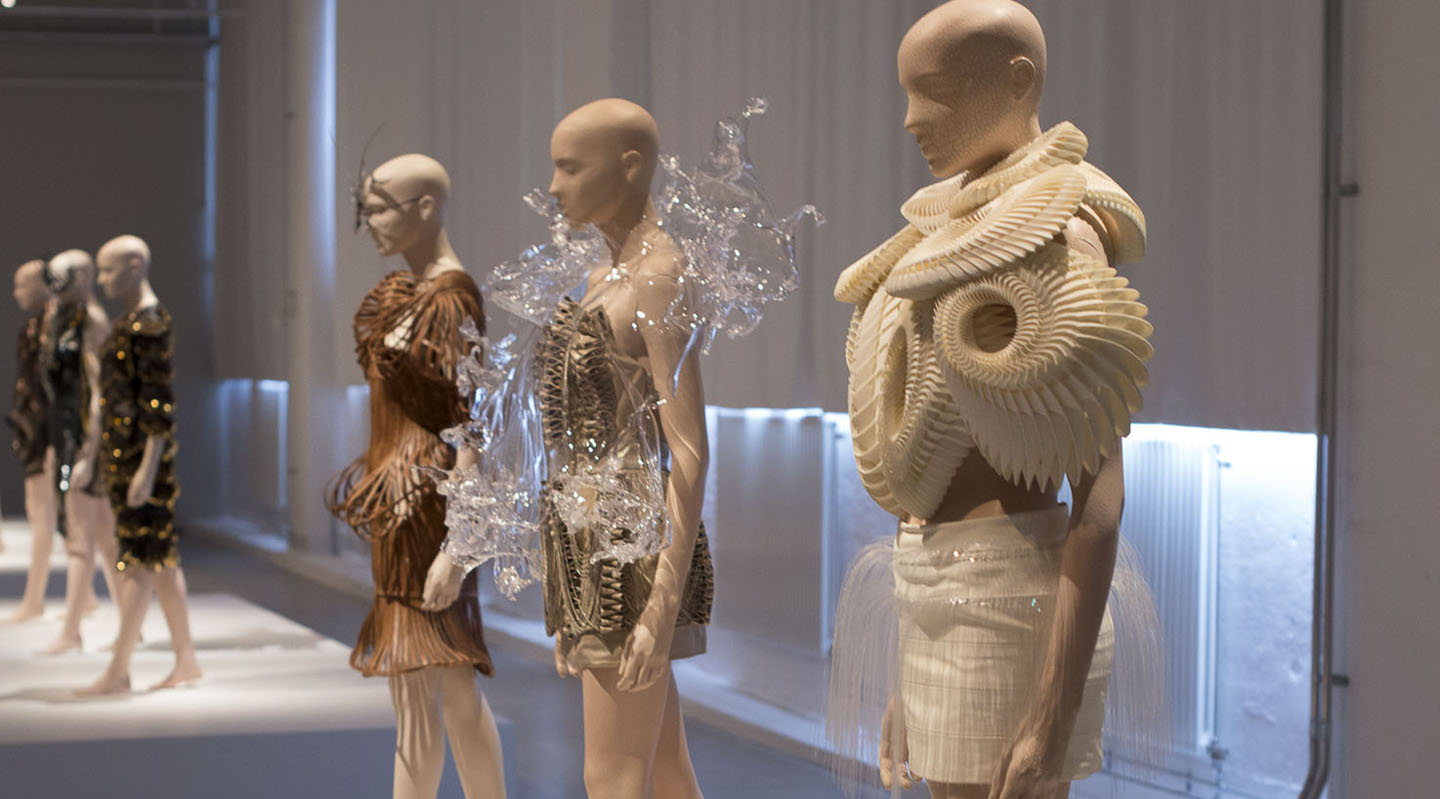 The Textile Museum of Sweden proudly presents the first major solo exhibition of one of todays most innovative and striking contemporary designers, Iris van Herpen. The exhibition offers an overview of her work from 2008 to the present. A selection of her most recent work, such as Capriole and the Micro collection will also be on display.

Iris van Herpen is renowned for her remarkable outfits in which she combines traditional craftsmanship with innovative techniques such as rapid prototyping. Her choice of material is radical, e.g. processed leather, synthetic boat rigging and the ribs of children's umbrellas.  Van Herpen creates organic and futuristic sculptural effects with an astonishing visual impact.

Creating a new silhouette is important in her work. Van Herpen regards fashion as a form of self-expression in which she translates her association and fascination with everyday reality into a collection. Each collection has its own narrative, and wearability is not the ultimate criterion. For instance, Radiation Invasion is about the invisible waves of radiation that surround us and make telecommunication possible. The Synesthesia collection has a neurological phenomenon as its point of departure, where a mingling of sensory perceptions occurs. There are people who can ‘see’ music, for example, or can ‘taste’ colours.

Van Herpen graduated from the ArtEZ Hogeschool voor Kunsten (ArtEZ Institute of the Arts) in Arnhem in 2006, did an internship with Alexander McQueen, among others, and started a label under her own name in year later, she was nominated for the prestigious Createurope: The Fashion Academy Award. Her outfits appeared in Vogue, Numero, Harper's Bazaar and Dazed and Confused. In conjunction with United Nude, she launched a limited-edition shoe line in 2011, the 3-D dress that she designed was acclaimed by TIME Magazine as one of the fifty best inventions of the year. Van Herpen exhibits her work at home and abroad, and 2011 she was the winner of the Dutch Fashion Awards and the RADO Young Designer Awards. In 2011 Van Herpen became a member of the prestigious Chambre Syndicale de la Haute Couture.

Reopening of the Textile Museum of Sweden

The Textile Museum of Sweden has been closed for two years due to its ambitious programme of development dedicated to transforming the museum into a Nordic center for fashion, design, textile art, the textile industry and innovative textiles. The first stage of the museums major refurbishment programme is now complete and The Textile Museum of Sweden has relocated to the Textile Fashion Center in Borås, Sweden.