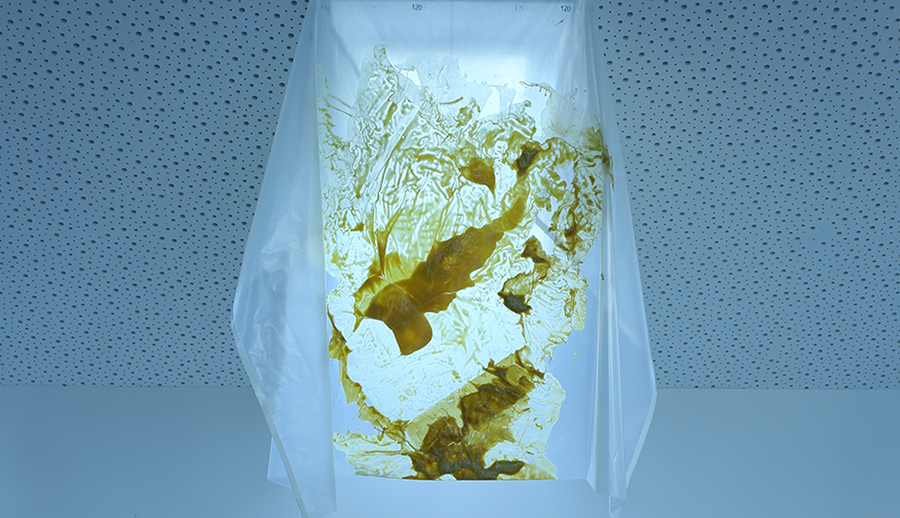 How can we design for the future? In this avant-garde exhibition architects, interaction, fashion and textile designers show their works in progress when they speculate about, collaborate on, and define how to strengthen the foundations of design for more sustainable forms of living.

The exhibition Speculate, collaborate, define – textile thinking for future ways of living, is a work in progress by the PhD students in the ArcInTexETN project. ArcInTexETN is an EU-funded training network of early stage researchers exploring new expressions of living through textile thinking. They collaborate in three scales – building, interior, and body – looking into methods for turning current scientific knowledge into the design of new forms of living.

With videos as their main medium, the students present different takes on the subject. In “Ahti”, a speculative short film about the first human being born in space, the story is set in the future. It’s 2076 and there is no water left on our planet Earth. Ahti wears the same suit every day, like a second skin. The skin has different properties that protect him and allow him to walk on any surface, levitate, communicate and store energy.

Have you heard about the Wolpertinger? It’s a hybrid animal whose appearance evokes the idea that, however different the parts are, they constitute a whole, functioning organism. With the animal as an analogue, a collection of videos are projections of different pieces of work, showing a patchwork of cooperation, exposing the working process of collaborative design.

The film “What is interior?" presents an interior landscape, a shifting view of this paradoxical space, narrated by a linguistic review that argues to define the term interior. The film gives an examination of the definitions that frame the term, as well as creating the fleeting textures that shapes it.

Oh, and bring your nose and your curiosity! This is not only an audio-visual exhibition.