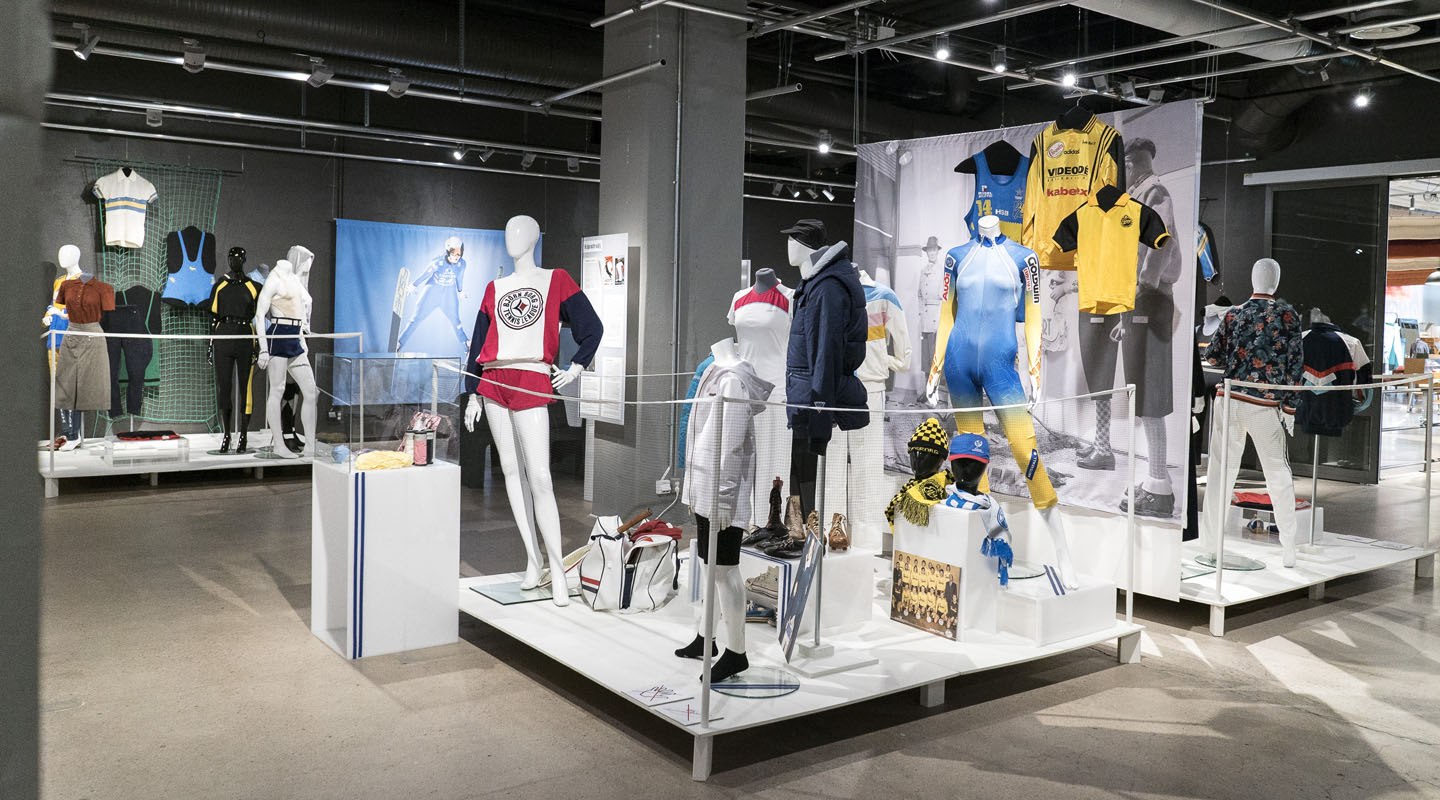 Dressed for sports – from BLOOMERS to MAMILs

The ‘Dressed for sports – from Bloomers to MAMILs’ exhibition focuses on the development of specialised sports clothing during the 20th century. It encompasses garments, photographs, and films, and explores the development of functionalities and materials, along with broader trends relating to fashion, body ideals, and ethics.

Today, it is only natural that sportswear be functional, pliable, and moisture-wicking. It should also look good, and yet be visually distinct from normal fashion garments. However, wearing particular clothing to play sports or exercise is a relatively recent phenomenon. In this exhibition, we tell the story of the development of specialised sports garments during the 20th century and up to the present day by focusing on various themes.

Sportswear reflects perspectives on status and ethics during different periods in time. Photographs from the early 20th century show men playing tennis in the white clothing that was fashionable at the time, while the few women who are shown participating are dressed, according to the rather unpractical fashion, in long skirts and corsets. Sporting was thus an elitist, and specifically male, activity. When wide cycling trousers –‘bloomers’– were introduced for women, they were considered shocking by the standards of the time. As early as the 1930s, however, women felt able to dress in shorts and ankle socks. Both the clothing and participation of women in sporting activities have continued to be debated to the present day.

Another area that influences the physical appearance of sportswear is current fashion, although sportswear influences fashion in turn. During the 1920s, a new, youthful ideal took hold, and it became fashionable to be involved in sporting activities. As a result, even fashion garments began to offer an increasingly wide range of movement, and tricot became more common. Many remember Björn Borg’s trend-setting headband and Ingemar Stenmark’s hand-knitted cap of the 1970s; during the 1980s, comfortable sports garments such as jogging suits, cycling shorts, and sports bodysuits moved from the world of exercise and fitness to everyday fashion.

Sportswear also drives the development of materials and design for improved garment functionality. In the 1930s, wool and tricot were complemented with stretchy lastex; in the 1950s, revolutionary synthetic materials such as nylon and elastane were introduced. This development has continued with breathable materials that transport sweat away, swimsuits that reduce water resistance, and sportswear with anti- odour treatments. In the future, we may come to wear sports garments with built-in heart-rate monitors and pedometers.