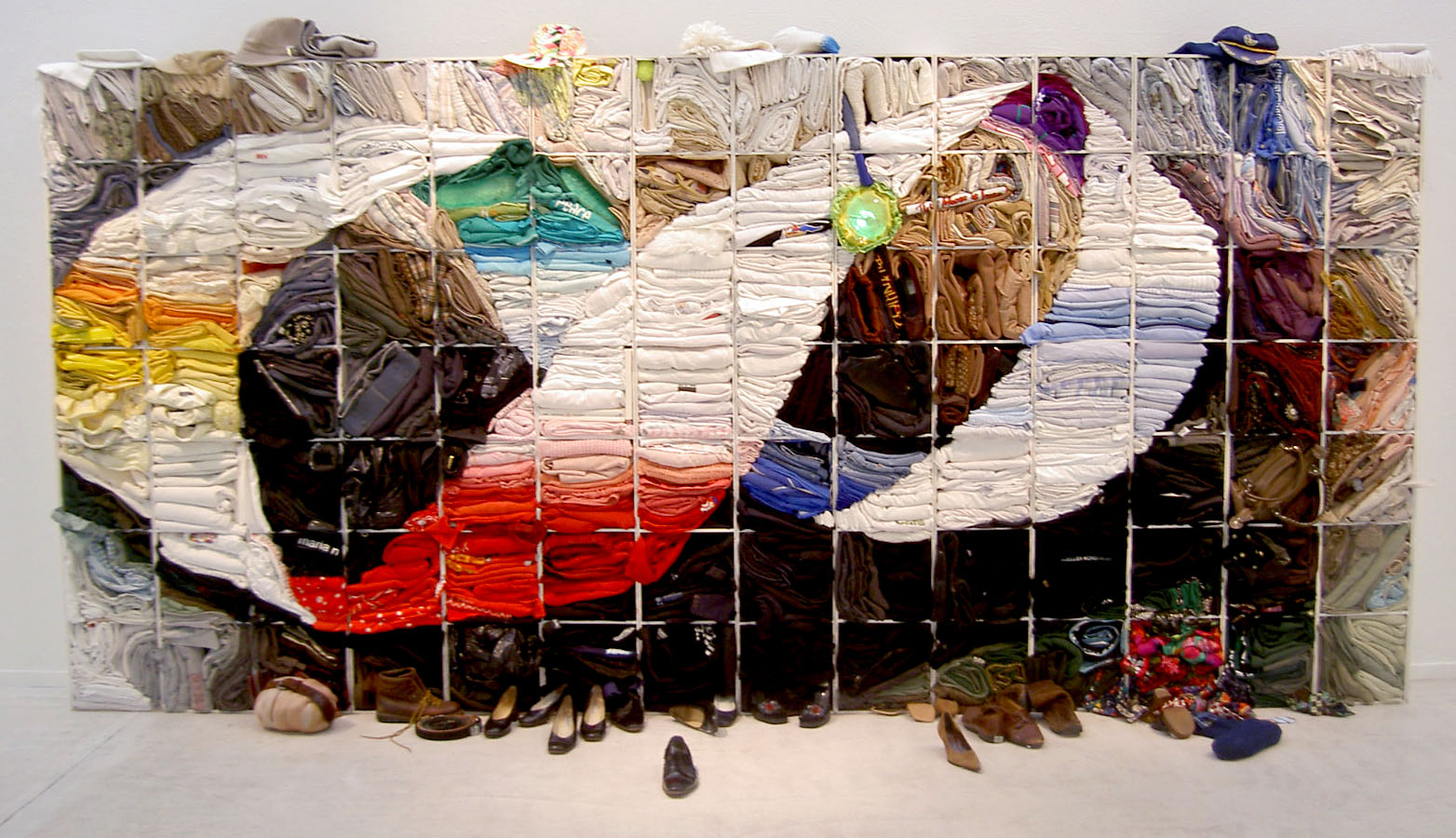 For Ever and Ever - Amen? by Monica Nilsson

The Berättelser om/Stories About exhibition consists of artworks in which textile materials and methods are used to describe, discuss, and understand the pressing issues of our time. Here, eight artists present stories relating to the exploitation of landscapes, refugees, global life cycles, and everyday occurrences in our surroundings.

Every day of our lives, we surround ourselves with textiles. One of the distinctive characteristics of textile materials is their intimate connection to us as human beings. This intrinsic property means that textiles are carriers of memories, associations, and meanings – textiles become suffused with the atmosphere of the times we live in. The exhibiting artists use precisely this potential when they mediate their ideas through artworks.

The often time-consuming process of creation of the works is here accorded an importance. Stitches have been laid atop stitches, a weave has slowly emerged, a patch has been carefully joined to another – the process of creating becomes visible, and is thus an essential part of the story.

The Berättelser om/Stories About exhibition is important because it both highlights the complexity of our age and reflects the recent interest in communicating via materiality within the field of contemporary art. The exhibition was produced in collaboration with Fiber Art Sweden (FAS), a network of artists who work with textile means and methods and strive to promote discussions and exchanges of ideas. The curator of the exhibition is the artist Inger Bergström.

Hildur Bjarnadottir lives and works in Iceland. She is a professor at the Iceland University of the Arts, Reykjavik, and defended her PhD thesis project – Textiles in the extended field of painting – at the Faculty of Fine Art, Music and Design in Bergen, Norway in 2017.
In her works, Hildur Bjarnadottir investigates the themes of places and belonging and ecology and the environment. Her work takes a specific piece of land – where she now lives and works – as a starting point. She sees the vegetation that exists in the place as a form of recording equipment that picks up information and signals from ecological and social systems. Bjarnadottir can be said to extract this information by using the plants to dye yarns, which then become the warps and wefts of woven pictures. This exhibition showcases a series of small-scale examples of these works.

Elizabet Christiansson and Maria Wahlgren both have MFAs from the Konstfack University of Arts, Crafts and Design, Stockholm.
The artists Maria Wahlgren and Elizabet Christiansson have been working on what could be termed ‘relay embroidery’ for a long period of time. Living in different parts of Sweden and working according to a set time schedule, they embroider things that they have seen or experienced in their local environments, creating on-the-spot accounts of the time and place they exist in: a street sign, a swimming float, a thought. The embroideries then become the material in a sculptural artwork; they are mounted on two large letters – an ‘N’ and a ‘U’ (‘now’ in Swedish). The work greets us with what could be a rallying cry, and a story of what the artists have exposed themselves to: trying to grasp the here and now!

Maria Hägglund has an MFA from the HDK Academy of Design and Craft, Gothenburg.
Maria Hägglund’s series of embroidered pictures present motifs that appear to describe something that we are not quite able to grasp. The works build on photographs that are taken in a hundredth of a second – on-the-spot accounts that become memories of the past. The embroideries then emerge through the use of small, simple stitches in a complex order that merge into something that the eye registers as a picture, a whole. The time-consuming process of creation of the embroidered pictures results in the fleeting photographed occurrences being accorded an importance that extends beyond the moment in time at which the photograph was captured. The forest is the stage for these densified moments – a place that can be perceived to be simultaneously dangerous and protective. It is perhaps a mental place that can constitute a spiritual panorama, which can also be a view directed inwards.

Aida Miron lives and works in NYC. She has degrees in architecture and an MFA from the Trondheim Academy of Fine Art.
Aida Miron’s artistic practice builds on a method in which mapping practices and research take a prominent position, and themes such as geopolitics are discussed. The two works shown in the exhibition, which are part of her extensive body of work, exemplify this approach. Through the textile material and textile methods, concrete examples of geopolitical violence on the South American continent are highlighted. In one, needle and thread were used to highlight the exploitation of landscapes for the extraction of gold; in the other, a gigantic infrastructural project is investigated. The thread and the textile material are a means of narration – stitch by stitch, the artist embroiders the consequences of exploitation.

Monica Nilsson has an MFA from the Konstfack University of Arts, Crafts and Design, Stockholm. In 2000, she was the first artist to be awarded The Nordic Textile Award.
Our clothes exist in an ongoing global cycle: a new garment is purchased and then thrown away, shipped to another continent, or ends up in a trendy second-hand store. In this way, clothes appear to possess eternal lives. The great circulation of clothes is also a sign of overconsumption and a production process that involves severe environmental impact. Nilsson’s largest piece in the exhibition deals with this global situation, which we are all more or less trapped in. The work can be described as a monumental shelving system, in which the folded clothes constitute pixels in an image that emerges: the horizontal number eight, the symbol of infinity and circulation. The clothes that Nilsson used are those at the very bottom of the system – those that cannot even be given away. In further works, collections of tablecloths and linen textiles constitute the building blocks of a sculptural artwork. Here, the focus is on textiles that were once considered to have a great value, but today have lost this status.

Johan Strandahl has an MFA from the Konstfack University of Arts, Crafts and Design, Stockholm.
Johan Strandahl’s work can be described as a reimagining of a textile process, in which camouflage-patterned military clothes constitute the starting point. We see traces of the different stages of the process, in that the patterned garments have been cut up such that each piece of material is one shade of colour. On a couple of wooden trestles, joined together using simple clamps, lie rolls of monochrome fabric in different shades. Pieces of material that appear to not yet have moved to the next stage of the process are on the floor. We are given to understand that the creation process is time-consuming and perhaps even meaningless, in that the cut-out, colour-sorted pieces are sewn back together again. Military clothing, with its associations with war and fear, is in the hands of the artist restored to the ‘harmless’ material that it once was – a demilitarising process.

Serhed Waledkhani lives and works in Trondheim, and has an MFA from the Trondheim Academy of Fine Art.
With his background as a Kurd and refugee as a starting point, Serhed Waledkhani works with different expressions that thematise identity and the feeling of being an outsider. The place-specific installation in the exhibition is built around a somewhat jerkily drawn stop-motion animation. Waledkhani draws multiple images on a single piece of paper with great intensity, layering drawings on top of one another so that traces of the lower layers remain in the picture. The animation presents the environment of refugee camps in a sketch-like, fragmented manner: a sea of tents, columns of trucks, etc. In front of and around the projection, out into the room, coloured threads have been hung. These threads disrupt and capture the projector’s light, while simultaneously making the shadows of the threads part of the story.

Fiber Art Sweden (FAS) is a network of artists who work with textile means and methods and strive to promote discussions and exchanges of ideas in the textile sphere of interest. FAS was founded in 1998, and since then has continually and consistently sought out new places and contexts. Curated exhibitions have taken place at, among others, the Hallwyl Museum, Eskilstuna konstmuseum (Eskilstuna Art Museum), Aguélimuseet (the Aguéli Museum), and Norrköpings konstmuseum (Norrköping Art Museum). Seminars have been arranged at centres including Moderna Museet (the Museum of Modern Art) and Konstnärshuset (the Artists’ House) in Stockholm. FAS received the 2011 BUS (Bildkonst Upphovsrätt i Sverige; Visual Arts Copyright Society in Sweden) Award for “their modern way of approaching textile art and broadening its platform as an artform in society”.