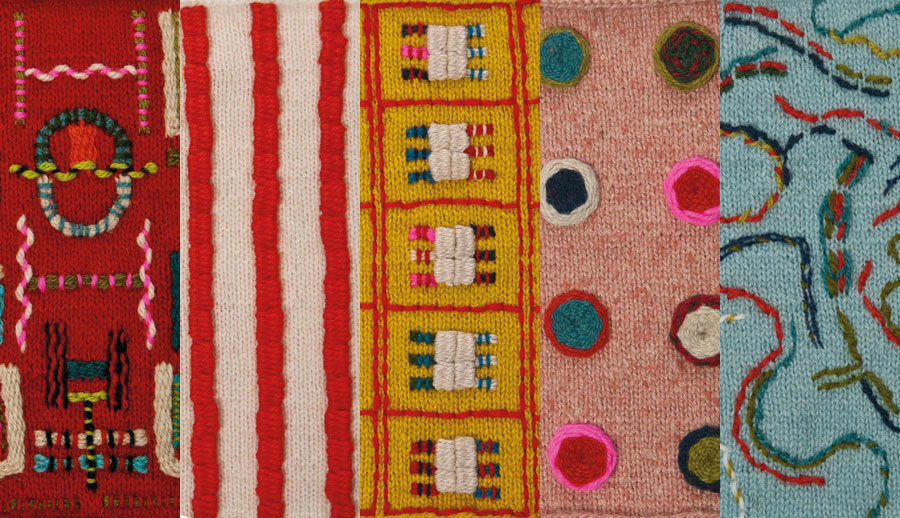 Stitches and seams in all of their many forms. Stitches that sketch lines, fill surfaces, and form patterns or embossed designs. Textile designer Britt-Marie Christoffersson takes knitting, and the surfaces that it creates, to another level with her third knitting exhibition.

What happens when one adds simple running and back, French knot, or retraction stitches to a knitted surface? Well-known stitches form the core of the exhibition, which comprises over 500 square samples and a number of garments. The result is colourful, experimental, and deeply enjoyable.

Britt-Marie Christoffersson is the knitting guru and source of inspiration who has developed the art of knitting over the past few decades. The results of her studies, in which she delved deep into the possibilities afforded by knitting techniques, led first to the exhibition Gamla mönster, nya tröjor, all världens stickteknik (Old patterns, new shirts, all of the knitting techniques of the world). This was followed by Stickning – ett hantverk att utveckla (Knitting – a handicraft to develop), in which she showed how well-known knitting techniques could be varied infinitely, and how a creative process can gather momentum if one idea is allowed to lead to another. This year marks the tenth anniversary of the exhibition, which was shown at the Textile Museum of Sweden.

Britt-Marie Christoffersson possesses extensive design experience. She has worked for local companies in the Sjuhärad area, including Almedahls and Borås Wäfveri, but is mostly known for the work she produced during the early phases of the design group 10-gruppen. During the late 1980s, her interest in knitting came to dominate her work and, in addition to her production for exhibitions, she published the books Svenska tröjor (Swedish shirts) in 1988 and Stickning – ett hantverk att utveckla (Knitting – a handicraft to develop) in 2009. Her entire output of pattern samples and written material is to be gradually donated to the knitting archives of the Halland Art Museum, where it will become a valuable source for further studies.