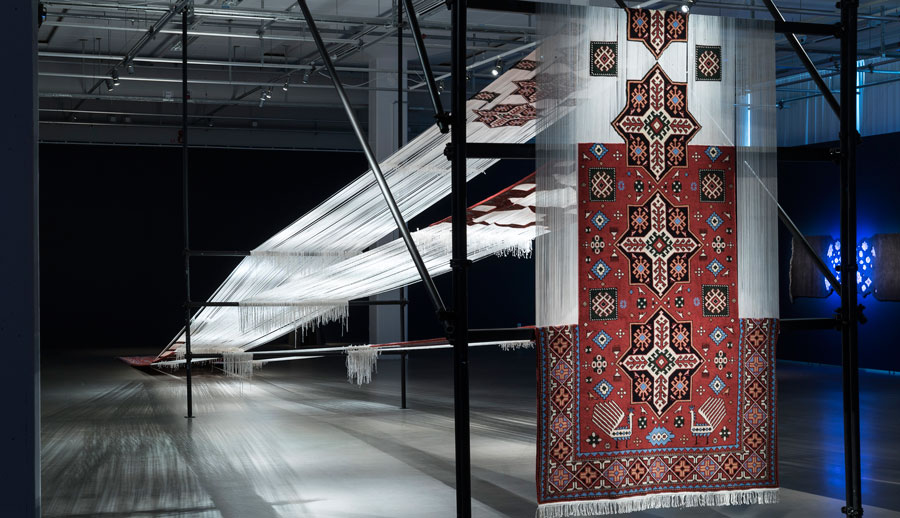 Equation is this summer’s solo exhibition, and has been created by the Azerbaijani artist and sculptor Faig Ahmed. This exhibition is his first in the Nordic countries, and shows new, place-specific works and unique methods. Ahmed is considered to be one of the ten most interesting textile artists of the moment, and has received a great deal of international attention in recent years.

"He doesn’t answer questions, he poses them", says Medeia Ekner, curator at the Textile Muse-um of Sweden, of the artist, who is known mostly for his unique way of transforming traditional Azerbaijani rugs into contemporary sculptural shapes. His method of deconstructing conventional patterns and symbols and reshaping them into original compositions often results in new, dramatic expressions.

Oriental rugs are covered in symbols, the patterns of which form stories that are well-anchored in a collective consciousness. These patterns include Buddhist and Muslim symbols and have greatly influenced European and Nordic mythology. Ahmed deftly navigates these traditions and rituals. Inspired by his visit to Sweden in Autumn 2016, he has explored and brought together Nordic and Oriental pattern traditions.

In the Equation exhibition, art, science and metaphysics are linked together in spectacular three dimentional installation. Patterns are distorted, broken up, moved around, conquered, taken over, demolished – and amongst all of this, new stories are created. They claim their own space within rooms, sometimes taking them over, as occurs with Equation.

Faig Ahmed studied sculpture at the Azerbaijan State Academy of Fine Art in Baku. He has worked with various media, including painting, video, performance and installations, and since 2003, represented Azerbaijan at the Venice Biennale on two occasions, and received a great deal of international attention.

The ambition of the Textile Museum of Sweden is to increase awareness of textile art, and this exhibition is part of the international textile art festival and conference Crossover, which will be held in Borås between September 12 and 19.

Read, print and share the Equation exhibition cathalogue as