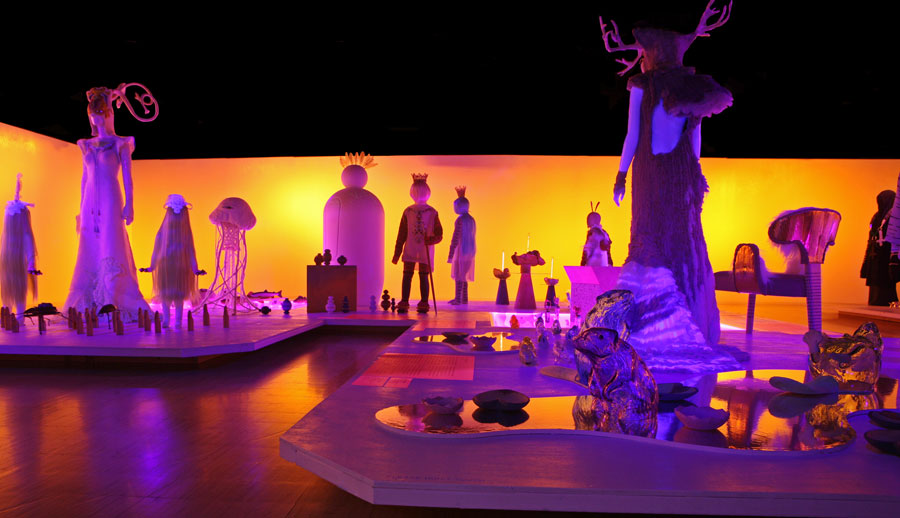 A vibrantly colourful procession of mystical creatures carrying magical items journeys through a northern landscape. Who are they, and where are they going? Is it a fairy-tale wedding party, a carnival, a funeral procession, a fashion show? Or is it perhaps a mix of all of these?

Next Level Craft is an imaginative craft exhibition that explores the borderland between craft, design, fashion, and art. Voguing*, felted wool, electronic folk music, root crafts, LED weaving, birch-bark plaiting, hand-painted wooden furniture, and high fashion are interwoven as part of a norm-challenging crafting saga that focuses on the alternative. With humour and heart, Next Level Craft engages with the age in which we live and highlights the magic and joy inherent in the creative powers of our hands.

The exhibition presents roughly 100 works by some 40-odd designers, artists, and crafters aged between 20 and 85 from all over Sweden. The works have been developed for the exhibition, with a focus on imagination, innovative shapes, and alternative application areas. Different generations and traditions meet, natural materials and technical innovations cross-breed, and forgotten crafting techniques are given new life in a contemporary context. There are many exciting things to discover – embroidered wool goddesses, carved gnomes and water lilies, high-heeled birch-bark shoes and jacquard woven LED-fabrics are just a few examples For the showing at the Textile Museum of Sweden, the content of the exhibition has been adapted to focus on textiles and fashion. Several entirely new textile works will be created by Helena Hörstedt, Karin Frankenstein & Tomas Auran, Johanna Hofring, and Carolina Rönnberg (Wilhja), among others.

Next Level Craft is an initiative of hemslöjdskonsulenterna (‘the regional handicraft advisors‘) of northern Sweden, and was created as part of Umeå’s European Capital of Culture 2014 festivities. It has toured Sweden and been shown at the Swedish Embassy in Washington and Swedish Institute in Paris. Its artistic leader is the artist and curator Aia Jüdes, who has created an experience-based exhibition in which the works are complemented by a soundtrack, music video, and evocative lighting, creating an exciting show for all senses and ages.

*Voguing is a dance style and subculture that developed within the New York gay scene of the 1980s. It is characterised by, among other things, precise, stylised hand and arm movements, acrobatic poses, and flamboyant fashion.

Supported by Region Västra Götaland and produced in collaboration with Västarvet, the Region’s natural and cultural heritage administration.